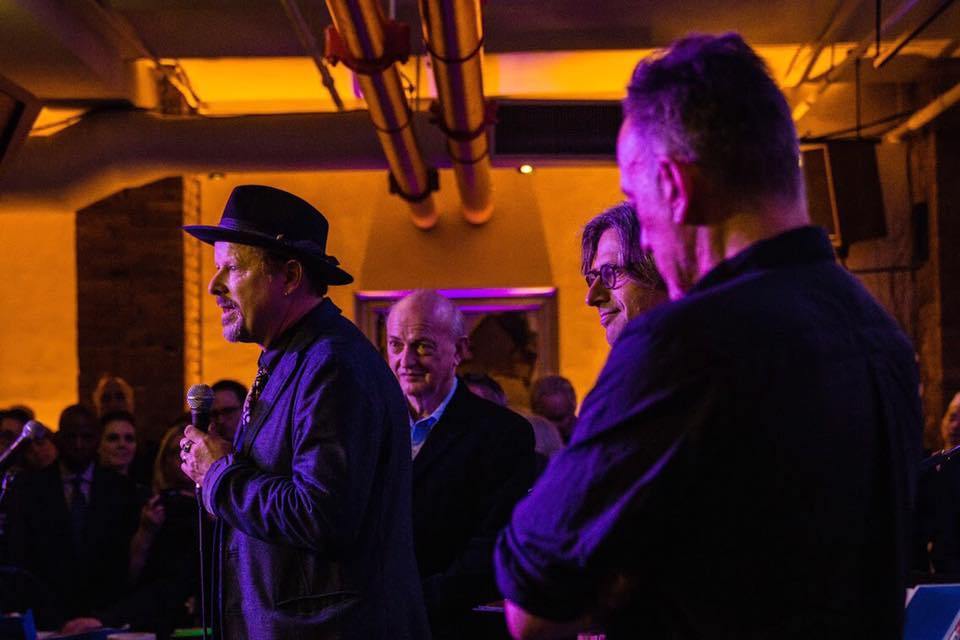 It was shortly after 8:00 on Saturday night when a Facebook feed appeared on my page from Mitch Slater who was at the Tribeca Grill attending the 27th annual Kristen Ann Carr Fund benefit A Night to Remember. The event is named in honor of the daughter of Barbara Carr, Bruce Springsteen’s co-manager and her husband, the author and radio host Dave Marsh. It was Springsteen who helped launch the fund with a benefit concert at Madison Square Garden shortly after she passed away from a battle with sarcoma.

Bruce Springsteen, who has been known to perform on occasion at previous events, could be seen mingling and nursing a drink, making one wonder if and when he might step onstage later. But in what felt like no time at all, he was on the bandstand alongside the night’s honoree, Danny Clinch and his Tangiers Blues Band. Clinch is a world renown photographer who first met Springsteen as an assistant for Annie Leibovitz on a shoot for Tunnel of Love and shot the cover of The Rising. Along the way he has won Grammys and published several books. His subjects have included Johnny Cash, Willie Nelson, Bob Dylan and Kanye West.

Clinch also plays harp for the Tangiers and might not have been on the bandstand were it not for the night he confessed to Shannon Hoon of Blind Melon that had taken up harp. “Great,” he relied. “Can you play with us tonight?” As Clinch recounted to film director Jeremy Dylan on his podcast My Favorite Album, by playing he had meant by himself in his room or at barbecues. “It’s all a big barbecue, a big party,” Hoon said in response. “Come out and jam with us.”

Then there was that night when Springsteen and Joe Grushecky put Clinch to the test at a benefit for the Light of Day Foundation. A night after Joe Grushecky sat in with the Tangiers at a show at the Stone Pony, the Pittsburgh rocker told Clinch that they would play “Murder Incorporated.” Clinch brought three harps for the occasion only to find that Springsteen and Grushecky changed the set list. They were going to do “Pink Cadillac” instead.

“I know Danny can take a picture but I don’t know about the harmonica,” Springsteen said to the audience, goading him playfully. But when it came time, Clinch leaned into it with everything he had.

At the Tribeca Grill, Springsteen launched into Johnny Rivers’ “Rockin’ Pneumonia and Boogie Woogie Flu” and followed it up with Chuck Berry’s “Down The Road Apiece.” When it came time Clinch instinctively followed him, perhaps with the experience and confidence he gained along the way sitting in with the Foo Fighters, Pearl Jam and Eddie Vedder to name a few.

The two men were united in song but more importantly cause, a legacy that Springsteen helped to establish from the time he set foot on a much larger stage not too far from the Tribeca Grill.

At the end of his 1993 tour, his benefit concert at Madison Square Garden raised $1.5 million to help fund an endowment for an annual sarcoma fellowship at Memorial Sloan Kettering Cancer Center, the New York hospital where Carr was treated.

With Joe Ely, Terence Trent D’Arby and Soozie Tyrell, that night was the genesis of the work of the Kristen Ann Carr Fund, which, according to its website, is the first foundation formed to exclusively address, gain understanding and provide treatment of sarcoma.

But the origins of the fund go back to the woman it was named for. When told that her future was uncertain and that patients didn’t respond to available treatments, her response was “Let’s change that.” As a letter from her family details, she began brainstorming about raising funds against sarcoma “alternately from a bed at Memorial Sloan-Kettering Cancer Center and her off-campus apartment at New York University” where she was an honor student in Journalism.

In our hyper connected world where information and resources are available at one’s fingertips, it’s easy to forget that the internet was just starting and social media didn’t exist then. One senses Carr seemed attuned to isolation she observed.

“Kristen received a near-constant stream of visitors during her hospital stays, but she noticed that many of her fellow young-adult patients spent a lot of time alone,” her family wrote on the website. “Caught in an awkward place between childhood and full adulthood, and at an age when one’s friends and peers feel invincible themselves and ill-prepared to understand serious illness, the other young adults at the hospital often struggled without any close personal support, and the professionals on hand seemed uncertain how to talk to them.”

That has spurred a mission to connect patients. The fund has provided awards to young clinicians early in their careers. As pointed out on the funds website, it is now recognized that, despite their rarity, sarcomas are among the keystones for finding solutions in many areas of cancer.

A Night to Remember honoree Danny Clinch grew up in Seaside Heights, New Jersey on the Jersey shore. As a teenager, he would bring a pocketful of quarters to play games of chance. One day he won and got a copy of Born To Run. Now the photographer who has his own gallery in Asbury Park, will have his work shown on screen on another Saturday night this month. On April 26, Clinch’s All I Can Say, drawn from footage shot by his late friend Shannon Hoon of Blind Melon, will debut at the Tribeca Film Festival in New York City. It will no doubt be an emotional night as it was Blind Melon that allowed Clinch to find his way as a photographer shooting them.

On this Saturday at A Night to Remember, Slater shared his Facebook video before it went viral and was picked up by Rolling Stone. In the spirit of the night, the financial adviser and podcast host of “Financially Speaking,” launched his own late night Facebook fundraiser in the spirit of the event and brought it to those who couldn’t be there.

The next morning continued with a tradition Dave Marsh started on Sunday mornings, On his Kick Out The Jams Show on SiriusXM’s The Spectrum, Marsh has been in an ongoingly wonderful countdown from his book The Heart of Rock and Soul: The 1001 Greatest Singles Ever Made. It’s been a labor of love and a delight for those of us who have been inspired by his writing and passion for rock and roll.

The morning after the benefit Marsh somewhere in the middle of the seemingly endless list, moving through songs by his old Detroit friend Bob Seger and the tremendous singing of Donna Summer, a woman who endured and embodies everything about being in the Rock and Roll Hall of Fame. When he got to Bob Marley’s “No Woman No Cry,” Marsh wondered why he hadn’t rated it higher.

Like his daughter, Marley had passed away of cancer but his legacy lives on. Then he confided about something he didn’t know until much later after her passing. This was the song that she and her fiancée Michael Solomon used to play late into the night when the bad news of the day was rolling in. “If you’re one of the parents, it becomes devastating,” Marsh confided. “I didn’t know that song could be more devastating.”